R6 Keloid Cream is a compounded cream that contains six different pharmaceutical ingredients. Dr. Tirgan has used both R5 (with five ingredients) and R6 (with six ingredients) creams on several of his patients. The responses in some patients, roughly 20% of patients have been dramatic.

The images below depict the most dramatic response that we have seen with this cream. The image on the left was taken by Dr. Tirgan in his office on April 2014. The image on the right was taken by the patient in July 2018. All this patient had done was to apply the R5 Cream to the keloid for three years. This dramatic response encouraged Dr. Tirgan to prescribe the cream to many more of his patients.

The images below were taken by one of Dr. Tirgan's patients who had applied the cream to her pubic keloid for several months. After one year of use, there was almost complete resolution of her tumoral pubic keloid. Images shown here were supplied by the patient who has meticulously documented the course of her own treatment.

Tumoral pubic keloid before and after treatment with R5 cream.

Ongoing Response in a Chest Keloid

The images below were submitted by another patient who used the R6 cream to her chest keloids for several months. Here is the e mail that she sent to me on July 19, 2021.

I wanted to provide another update with pictures on my chest keloids using the R6 cream, which I have just re-ordered again. I have been using it since June 2020 and I can definitely tell some improvements. See attached for the progression pictures with dates. I believe the cream is continuing to help with the bulky areas as well as reduce the redness to some of the areas that were less bulky, or more flat, to begin with. The keloids also feel a bit more soft in some areas. I very rarely get shooting pains through them anymore. Occasionally, they will still itch, but not nearly to the extreme as they did before starting the cream. They are still sensitive to the touch and it is hard to tell if the cream has improved that at all. However looking at the comparison pictures today I am happy with the results. 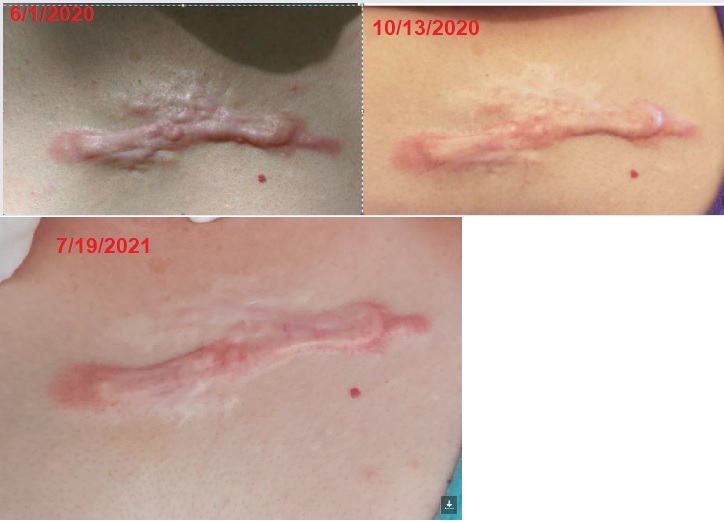 The third patient is a 59-year-old African American female, who developed keloids on her chest following surgery. The lesions (shown in the image below on the left side) were causing significant pain and discomfort, to the point that this patient could not even touch them. Within a few days of applying the R5 cream, the patient noticed a significant reduction in her keloid pain. The image on the right was taken 10 days after she started using the R5 cream. The surface of the keloid shows dark mottling and the keloid appears to be less inflamed. She is now able to press against the keloid and feels no discomfort. Although it is too soon to assess the response to the cream, the patient is encouraged to continue the treatment.

Who Should NOT take R5 or R6 creams

1- Anyone with a history of drug allergy (to any drug). We had one patient who had a known past allergy to NSAIDs (non-steroidal anti-inflammatory drugs) who used the R6 cream and had an allergic skin reaction.  She was advised to stop using the cream.

What can be expected from the keloid cream?

About 20% of patients using the cream have reported improvement in the appearance of their keloids, but what is encouraging is that the cream has clear anti-itch activity in about 66% patients who have itching and pain. For those who have been on the cream, please continue applying it to your keloid twice per day, unless you notice a problem. The cream must be taken for at least several months to achieve results. The regression seen in the tumoral keloids took over a year in the patients described above.

Positive comments about the cream

1-I started using the R5 cream on August 30th, 2018 and almost two months later I can honestly say that the keloid has improved. It has become flatter, less red and also the symptoms of pain and itchiness are still present but improved. I will continue to use the cream as long as Dr. Tirgan agrees and hopefully, it will become skin leveled (TC).

2-Keloids have decreased in size slightly each day but is noticeable (JJ).

5- I’ve had keloids are over 32 years. After applying the cream they are a bit softer and less “angry” although I must say that it is minimal yet I can notice it (CS).

6-Swelling and thickness is getting less and secretion has also decreased. Noticed slight improvement in itching and irritation (GP).

7-The itch has been reduced in all except the big one on my chest. The pain in my back has been less. The size of most of my keloids have been reduced. The smaller ones are most noticeably smaller. The big ones on my shoulders used to get very inflamed when it was time for another injection but they are not inflamed and appear to be getting smaller. I have not had or needed any injections since using the cream. I’ve been using the cream for about six weeks so far (PB).

8-Some of the areas that are already flat but slightly red now have a more natural appearance. The part of the keloid that remained after the cryotherapy and somewhat raised may be a bit flatter and no longer itches. The smaller of the two keloid areas appears to show more improvement. Applying the cream to the very small keloid has resulted in flattening of the raised area (AC).

10-It helps with the pain I use to feel, it has worked better in some areas than other.

11-Day 1 after using R5 cream I noticed a difference right away. The keloids were a lot smaller, they also did not feel as bumpy. The color of my keloids matched my skin pigmentation with the exception of some of the bigger keloids still being light pink. After about 2 1/2 weeks of using the R5 I notice that after I put the cream on, the bigger keloids are very flattened for about 8 hours then rise back up. The bigger and more noticeable/ bumpier keloids are having a harder time diminishing. Overall, I am highly satisfied with the progress my keloids have made in the short amount of time that I have been using the R5 cream (MG).

12-The cream had been working pretty good in my opinion. It feels like the keloid has gotten a lot smaller (AA).

13-I have noticed that the texture of the keloid has softened and the color is changing and is less red and irritated looking and it seems like the borders are slowly starting to shrink (DB).

Who can order the cream?

If you have not been a patient of Dr. Tirgan, it is best to have a tele-medicine consultation with Dr. Tirgan before you try the cream and to also remain under remote care of Dr. Tirgan while you are using the cream.

How to use the cream?