This patient presented in June 2014 with extremely painful anterior chest wall keloid.  History of her keloid dated back to when she acquired chickenpox at age 3. This resulted in formation of two small keloid lesions, one on her leg, which over time resolved, and another one on her chest, which never resolved and continuously grew despite numerous intra-lesional steroid injections.

In December 2011, after having dealt with this keloid, she underwent surgery to remove the keloid which at the time measured less than one inch in diameter (approximately 2 centimeters in diameter). It is important to note that her keloid was painless and free of any symptoms prior to the surgery.

Within a few weeks from surgery, a new yet very painful and pruritic keloid developed at the site of surgery.  Her surgical wound practically became a keloid as the wound was healing.

Over the next several weeks and months, the keloid pain became so severe that she could not sleep at night or even lay on her stomach.  She could not wear seatbelt while driving without having something to cover the keloid to prevent pressure from the seatbelt.

Intra-lesional steroid injections were tried. They were extremely painful to administer and ineffective. She found some relief from silicone sheets as they would control her pain and provide a cover that would simply protect the keloid from being touched by her clothing.

At times, her pain was so strong that she would even avoid going to bed, knowing that her pain will get worse by her turning and tossing in bed.  She had even contemplated suicide as a solution to her chronic pain.

At the time of her presentation, her keloid appeared inflamed and extremely sensitive to touch. In July 2014, she was treated with intra-lesional chemotherapy, knowing that the injections would be extremely painful to deliver, and the drugs would be causing pain.  She was prescribed adequate pain medications for 2 weeks following the injections.  As predicted, few weeks after the injection, her keloid pain was completely resolved. She remained symptom free for many months after her first chemotherapy injection.

She returned several months later, with recurrent pain.  She was re-treated with the same drug, Following the 2nd and 3rd injections, yet she found the process of injecting her keloid very painful and stopped the treatments all together.

The video below is an interview with this patient. 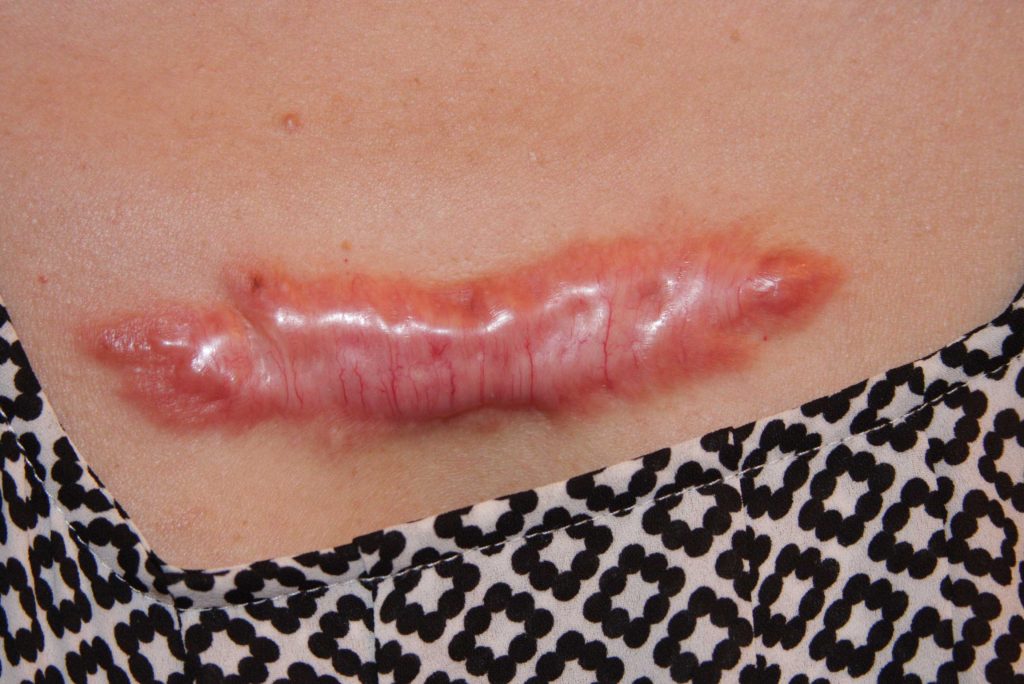