Iatrogenic is a term used for any condition that is caused by a physician. In surgically removing a keloid, the surgeon's scalpel will first injure the skin and induce a wound that is often wider than the keloid itself. This wound will trigger keloid formation and, in the great majority of patients, result in the formation of a much larger keloid. The unfortunate truth is that most keloid patients do not know this, and undergo surgery in order to achieve quick results. It is very true that the keloid is instantly removed, however this instant gratification may result in long term poor and often worse outcomes.

Knowing that surgery alone will often worsen the situation, surgeons operating on keloids advise another treatment after surgery to reduce the chance of recurrence of the keloid. Steroid injections and radiation therapy are the two commonly used methods after surgery. Although these combinations may work for some patients, in many patients the keloid will regrow and become larger than it originally was.

As depicted in the case below, removing a large keloid leaves a wound that the surgeon cannot easily close. In order to close the wound at the site of an excised keloid, some surgeons use another surgical procedure known as skin grafting. Skin grafting involves removing a piece of normal skin from another part of the body and transplanting it to the wound that cannot be otherwise closed.

Removing normal-appearing skin for purpose of skin grafting in a keloid patient can result in the formation of a new keloid at the site where the graft is taken from, one that is caused solely by that act of a physician.

Below is the case of an iatrogenic thigh keloid. This gentleman started with a small neck keloid. Unfortunately, he had several surgeries to remove his keloid. Each surgery led to the formation of a larger keloid. In the end, a surgeon suggested to remove the keloid one more time and perform a skin graft to cover the gap left behind after surgery.

Radiation therapy was also used after surgery to reduce the chance of recurrence in the neck. Unfortunately, this young man, not only had a debilitating recurrence in his neck, but also developed a serious keloid, a Iatrogenic one on his thigh, where the skin was removed to cover the wound in his neck.

Surgery has a very limited use in treating carefully selected patients within the boundaries of a carefully planned treatment plan. 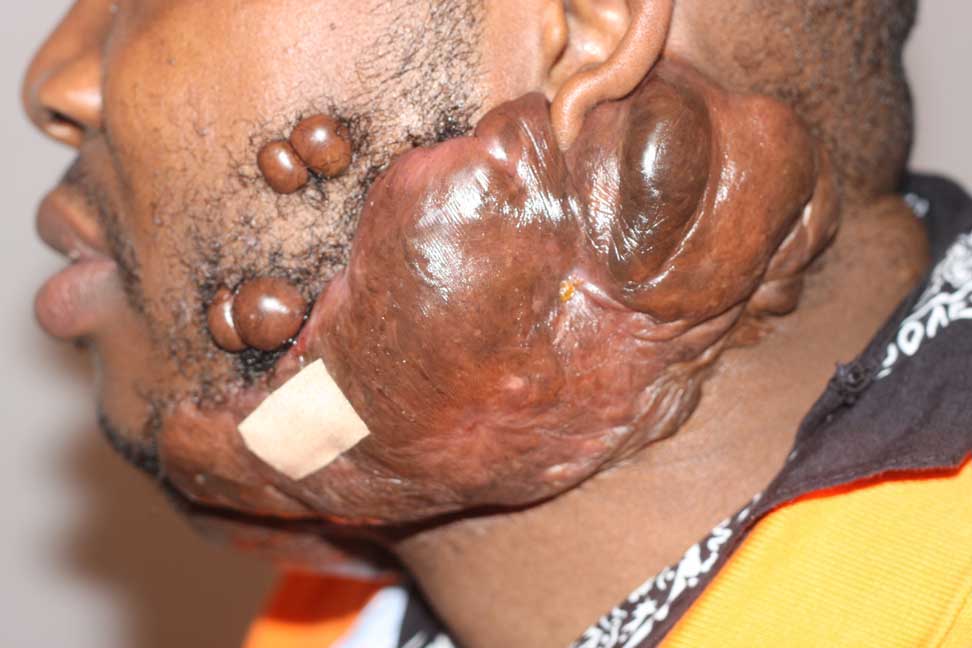